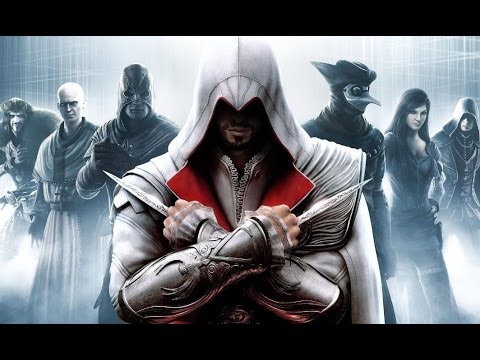 IF YOU PREFER TO WATCH IN EPISODES, CLICK HERE:

Assassin’s Creed Brotherhood was the 3rd installation in the series. This was Assassin’s Creed at it’s peak, with our favorite assassin of all, Ezio Auditore. We will do Revelations soon, and make sure to have the entire series done by the time Syndicate comes out. Although the series itself is too long to do a complete series vid, we are thinking of doing an “Ezio Auditore Story” including his main games, and some other content he appears in.

The story is set in a fictional history of real world events set in two time periods, the 16th and 21st centuries. The main portion of Assassin’s Creed: Brotherhood takes place immediately after the plot of Assassin’s Creed II, featuring 16th-century Assassin Ezio Auditore da Firenze in Italy and his quest to restore the Assassin order, and destroy his enemies: the Borgia family. Intersecting with these historical events are the modern day activities of series protagonist Desmond Miles, who relives his ancestor Ezio’s memories to find a way to fight against the Assassins’ enemies, the Templars, and to prevent the 2012 apocalypse.

Download our App here, or search for GLP in the App Stores:
Android:
Apple iOS: