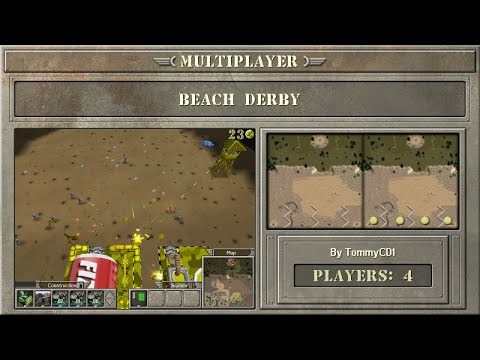 All three maps are for 4 players. Like in Army Men: World War, players start with 5,000 plastic but NO electricity. All four player spawn in the south of the map, being separated by stone walls. These walls cannot be flown over by air. Several peachy toys and electric sources lie scattered on the beach to the north, and the northern forest holds some 9volt batteries and more plastic sources. There is a garden lamp in the north to fight over, unless you play the king of the hill version. To win the node control ruleset, you must capture all five nodes on the map. These nodes will be marked on your minimap and will notify everyone upon capture. To capture a node, simply have at least one unit stand next to it without interference by opponents.
– A node will change to the color of it’s current owner.
– The barracks can be upgraded by scrolling the build menu or by pressing ‘u’.
– Music used is from Army Men: World War.
– The flamethrower does 10 damge per 0.3 seconds. So he is 66% better than a machinegunner.
_________________